Match the Pain Reliever to the Pain

Headaches, cramps and other aches and pains can be the kryptonite of supermoms like you. Don’t get sidelined! Check out the pain relievers that help you feel better so you can get back to the life you love.

You may be a pro multi-tasker, but few can juggle work, family and other responsibilities when in physical pain. And with so many people relying on you, you don’t have time to get sidelined by a headache or other aches and pains. You just need relief.

The trouble is, with all the over-the-counter pain relievers available, deciding which is best can be, well, a major pain. But it doesn’t have to be. Find your ailment below, then the treatment that experts say is most effective so you can get a grip on pain and get on with your life. (If you have health problems or a medical condition, however, consult your doctor before taking any over-the-counter drugs.)

1. Headache
Whether you have a tension headache or a migraine, look for a pain reliever that combines acetaminophen, aspirin and caffeine. “The meds block pain at different levels, so the combination tends to be more effective than any one alone,” says Dr. ­Vincent Martin, an internist and headache expert who teaches at the University of Cincinnati College of Medicine.

How they work: When you have a headache, blood vessels in the brain dilate. Caffeine constricts those vessels, easing pain, explains Martin. Meanwhile, aspirin helps block pain-provoking chemicals in the brain called prostaglandins and improves the pain-relieving effects of acetaminophen.

See a doctor if: You have frequent headaches. Also, consult a medical doctor if you have liver problems, because you may not be able to take acetaminophen.

2. Heartburn
For occasional heartburn, any chewable or liquid antacid will quickly neutralize stomach acid to provide relief, says Dr. Charlene Prather, a gastroenterologist with a master’s in public health, and an associate professor at the Saint Louis University School of Medicine.

If you’re prone to diarrhea, choose an antacid with aluminum hydroxide or calcium rather than magnesium. Vice versa if you tend to get constipated.

See a doctor if: You get heartburn more than a few times a week or your symptoms worsen.

3. Back pain or strained muscles
Ibuprofen and naproxen (aka non-steroidal anti-inflammatory drugs, or NSAIDs) are stronger and will last longer than other pain relievers, says Dr. Dana S. Simpler, an attending physician at Mercy Medical Center in Baltimore. They block the production of pain-causing prostaglandins and reduce inflammation in the strained muscles.

If you have high blood pressure or stomach or kidney problems, however, NSAIDs may not be an option. Acetaminophen is the next best thing. It targets the part of the brain that receives and processes pain messages from the injured area.

Whichever pill you take, you can also rub on a topical pain-relieving gel containing menthol or salicylate, says Simpler. The anti-inflammatory agents “are absorbed through the skin, so the majority of the medicine goes directly into the muscles,” she explains.

See a doctor if: Your back pain or muscle strain persists or worsens after a few days.

4. Flu aches and fever
Reach for either an NSAID (ibuprofen or naproxen) or acetaminophen, says Simpler. Both reduce your fever and alleviate achiness by affecting the brain’s ability to receive pain messages. NSAIDs also calm inflammation.

NSAIDs are stronger and work longer, but they can upset your stomach. So if you are nauseated or susceptible to stomach problems, you may be better off with acetaminophen.

Either way, avoid aspirin or medications containing aspirin. Ingesting it when you have the flu can trigger a rare but dangerous condition called Reye’s Syndrome.

See a doctor if: You get chest pain, shortness of breath, a seriously phlegm-y cough or fever that lasts longer than a week.

5. Menstrual cramps
Surveys suggest the majority of women experience some degree of menstrual pain. In this case, NSAIDs are usually your best bet. They block the production of prostaglandins that cause muscle cramps and spasms in the uterus.

Take ibuprofen or naproxen around the time you expect your period to start or at the first twinge of pain. Doing so will keep you ahead of the hurt, says Dr. Jill Maura Rabin, head of urogynecology at the Long Island Jewish Medical Center.

See a doctor if: NSAIDs don’t offer sufficient relief and you can’t function or if your cramps are accompanied by unusually heavy bleeding.

Author
Natalie Wells
Natalie Wells is a beauty and health specialist offering advice on beauty tips and healthy living wisdom that she practices to keep looking healthy and attractive at age 50. She has been in the health and beauty field for 30-years.

Secrets to Sneaking in More Sleep

Forget the snooze button! If you need more sleep, the trick is to change your habits during the day. Check out these real strategies for getting a good night’s rest.
bylifeandbeauty 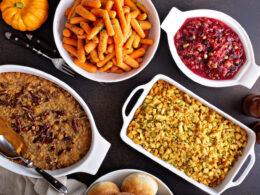 Love feasting on Thanksgiving dishes, but not the stuffed feeling afterward? Try some simple tips and healthy Thanksgiving recipes to help you indulge the smart way.
bylifeandbeauty

Thinking of trying the Paleo diet plan or a juice fast?,Read what nutrition experts have to say about the latest trends before you start.
bylifeandbeauty