Can’t believe the numbers on the scale? Here are some common reasons why your weight may fluctuate.

Have you ever stepped on the scale in the morning and smiled because you’d dropped a pound or two? Or, upon seeing higher-than-usual numbers, blamed your unexpected weight gain on heavy shoes or the lunch you just had?

Most women play some version of the scale game whenever they weigh themselves, but the truth is there are at least eight reasons why the numbers can fluctuate so much. Remember these, and the next time the scale doesn’t cooperate, you’ll know why:

You’re wearing clothes. On average, clothes add up to 2 pounds to your actual weight. “Summer clothing tends to be relatively light, and winter jeans and sweaters could add more than 2 pounds,” says Katie Heddleston, a registered dietitian based in Cleveland. At home, weigh yourself in the nude first thing in the morning. At the doctor’s office, take off your shoes and jacket for a more accurate reading.

You just finished working out. When you exercise at a high intensity, you burn glycogen calories (carbs), which hold water weight. You might see a 5-pound dip on the scale after a high-energy spinning or Zumba class, but don’t do a happy dance just yet. The drop isn’t a true weight loss; it’s a loss of water weight, which will quickly go back on once you rehydrate. In fact, “you need to drink 16 ounces of water for every pound down after a workout to replenish your water stores appropriately,” says Heddleston.

You just had a big salad or vegetable soup. Eating fiber-filled foods like veggies can make the scale numbers go up temporarily, but don’t despair. Fiber is not digested or absorbed by the body. It’s considered a non-nutrient, which helps to move food through the body and aid digestion by attracting water to the small and large intestines. Later, once the fiber has done its job, you should see the scale go down again.

You attended happy hour last night. A night of drinking can add a lot of unexpected calories — and weight. “A 12-ounce can of beer has about 150 calories, a 5-ounce glass of wine has approximately 125 calories, and a 1.5-ounce shot of hard alcohol has about 100 calories — and that doesn’t even include the calories contained in the mixer,” says Rachel Begun, a registered dietitian based in New York City. Keep that in mind before you order another cosmo or dirty martini. Plus, alcohol impairs judgment and stimulates appetite, which may tempt you to reach for those diet-busting sliders and nachos.

You had Chinese takeout for dinner last night. Consuming high-sodium foods like canned soup and frozen meals can push the scale upward, and so can the consumption of soy sauce and MSG in Chinese food. Water helps the body absorb excess sodium so that it can eventually be flushed out. As a result, high-sodium intake can equal temporary water-weight gain.

It’s that time of the month. Water weight adds extra pounds right before you start your period. Researchers think hormones are the culprit: A shift in estrogen and progesterone right before menstruation can cause water retention and swelling. But don’t worry, says Heddleston; it’s temporary. After those few days, your weight will return to normal.

You haven’t, um, gone in a while. The numbers on the scale may rise if you’re constipated. Begun recommends lots of fiber — about 30 grams a day from fruits, veggies, whole grains, beans and nuts — plus plenty of water and exercise to move things along. Once you’re regular again, the added weight will fall away.

You’re under the weather. If you have a cold or the flu, you may not eat as much as usual, which can slow down your metabolism and add a pound or two. On the other hand, if you can’t keep any food down because of a stomach bug, you may see a drop in the scale numbers. In either case, your weight will stabilize once you’re healthy.

Because it’s National Heart Month, we’re giving you the three most important steps to take to improve your cardiovascular health.
bylifeandbeauty 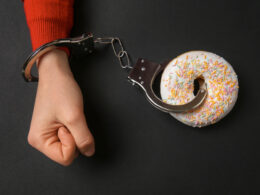 How to Kick the Sugar Habit

Reducing your sugar intake is a smart way to cut down on calories and improve your health -- but it's not always easy. Try these health tips to get started.
bylifeandbeauty

Tired of sniffling and itching your way through allergy season? Adding these foods to your diet may help relieve your worst symptoms.
bylifeandbeauty

Repair Winter Damage — Fast! — With These Beauty Tips and Tricks

Cold weather can do a number on your hair and skin. Here's how to combat the split ends, roughness and chapping and stay smooth year-round.
bylifeandbeauty